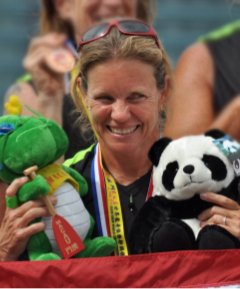 Dragon Boat Training Inc. is proudly led by Connie Flesuras. Connie brings 20 years of dragon boat paddling, team and club management, coaching, and drumming experience to the company. As a founding, and still active member of Wasabi Paddling Club in Portland, Oregon – one of the largest paddling clubs in the United States, she is ready to share a wealth of knowledge about the sport with you and your club.

Connie brings experience in club management and crew training. She works closely with many US dragon boat paddling clubs to enrich and improve the paddling experiences for their members. She is especially proud of the opportunity to work with the Breast Cancer Survivor paddling community since 1993. She helped to create the first breast cancer survivor dragon boat team in the United States.

Kathy Skinner, a Dragon Boat Training staff member for three years, has paddled competitively since 2006.  She currently serves as President of the Pacific Dragon Boat Association, which is part of the United States Dragon Boat Federation representing the Western region of the United States.  Ms. Skinner also coaches for the Wasabi Paddling Club in Portland, focusing on stroke technique, blending, and race management. She is also highly experienced in club management, having served on Wasabi's Board of Directors for four years.

Ms. Skinner's prolific paddling career includes paddling for Team USA in Prague in 2009, where she and her teammates took home silver and bronze medals.  She and Team USA also won a bronze medal in Tampa in 2011.  She has paddled in Club Crew World Championships in Penang in 2008, Macau in 2010, and Hong Kong in 2012.